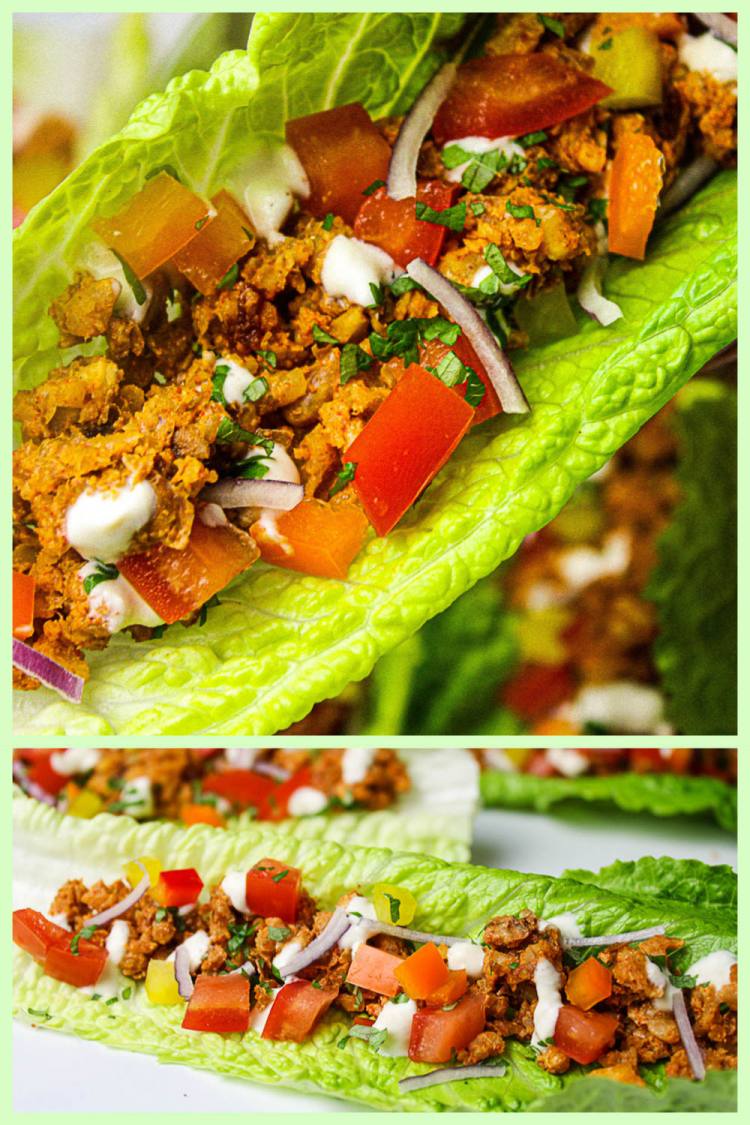 Your friends and family are sure to love these vegan tacos. They might be a little skeptical at first when you tell them the ingredients, but maybe you just let them try it out first. Everyone will be so amazed at how much it even looks like taco meat.

Not only can you brag about how tasty the tacos are, but you can also explain how healthy they are! If you’re vegan, vegetarian, keto, or just trying something new, these walnut meat tacos are great for anyone. This recipe is:

One bite of these flavors, and it will surely be a trip down memory lane. Your long love for that classic taco taste is fulfilled with this vegan taco meat. Not only does it taste delicious but it’s ready to eat in less than 20 minutes.

So what is the secret ingredient?  Walnuts.

Many of you may think of walnuts and just think about walnut brownies, or walnut desserts.  But in this recipe, walnuts are the star of the main entree.  This nut “meat” is super quick and easy to make.  Not to mention that it is loaded with nutrients and health benefits.  This sweet and smokey walnut crumble is the perfect raw ingredient.

While we do love our meat alternatives from time to time, there’s nothing better than making your own “meat” at home in 5 minutes. That is super quick! Most raw food recipes require many ingredients and take lots of labor to make. This raw vegan recipe needs no dehydration time, no fermentation, and no tedious fruit or vegetable processing.

That’s not to say we don’t enjoy and appreciate recipes that utilize time as an ingredient. But sometimes more often than not quick and easy is the way to go. We actually made this recipe for a dinner party the other night. Our friends were totally surprised and amazed because it actually looked like taco meat.

We do our best to avoid heavily processed foods, mostly because of the low nutritional content, preservatives and multiple ingredients we’ve never heard of before. Since this recipe is raw, all nutrients are intact, and no preservatives are involved. And let’s face it, fresh, is always best.

This healthy vegan recipe will be sure to fill you up as well. With high amounts of protein and fat in the walnut taco meat, you may even dare call these: “Raw vegan keto tacos”.

Don’t worry about the traditional couch lock feeling after a greasy plate of tacos because these tacos will leave you feeling energized and refreshed.

Plant based foods have also long been associated with reduction in health risks. Walnuts are no exception to that list.

Walnuts are one of the oldest tree foods known to man dating back to 7000BC. They are a round single seeded stone fruit that comes from a tree. Beneath the husk of a walnut fruit is a wrinkly globe shaped nut. This nut is then split into two flat segments.

Walnut trees are native to eastern North America, but are commonly grown in China, Iran, and in United States in areas such as California and Arizona. California alone accounts for the majority of the United States production and distribution of walnuts.

Maybe you’ve noticed but walnuts kinda look like a brain. As it turns out they are very beneficial to the brain. Coincidence? Apart from brain function, there are many health benefits of walnuts. Some of the major benefits of walnuts include:

Walnuts are also a good source of things like:

Walnuts are high in the healthy monounsaturated and polyunsaturated fats and omega-3 fatty acids. in addition to being a good source of protein.

Walnuts are actually being studied more and more. There’s so much interest in this one nut that for the past 50 years scientists and industry experts have gathered annually at the University of California, Davis, for a walnut conference discussing the latest walnut health research. They usually study the English variety, which is also the most commonly available.

The other most common variety of walnuts is the black walnut. Most of walnut productions come from China. Following in order from greatest to least production is the United States, Iran, Turkey, and the rest of the world.

Although this we used this walnut meat for tacos, feel free to add this recipe as a substitute for anything with ground beef! You might not be able to smash this nut into a patty, a vegan meatloaf, or some meatballs, this method works well for when you just need a crumbly substitute.

Obviously it’s not real meat, but some walnuts, a date, and a couple of spices it sure comes close!

In addition, it is also possible to change up the seasonings to better suit other global cuisines. For example, use the same method to make the walnut meat but for an Indian twist maybe add some turmeric, coriander, paprika, ginger and garam masala.

For more of an Italian flavor try Italian seasoning, oregano, sage, basil and sun dried tomatoes. Don’t be afraid to get creative!

Other ways to use walnut meat, include:

Trying to veganize your tacos? Heres some ideas.

Some amazing things we like to put on our raw vegan tacos include:

Let us be the first to tell you, it is out of this world. Cheers to a whole food life!

Your friends and family are sure to love these vegan tacos. They might be a little skeptical at first when you tell them the ingredients, but everyone will be so amazed. It even looks like taco meat. Not only can you brag about how tasty the tacos are, but you can also explain how healthy they are!