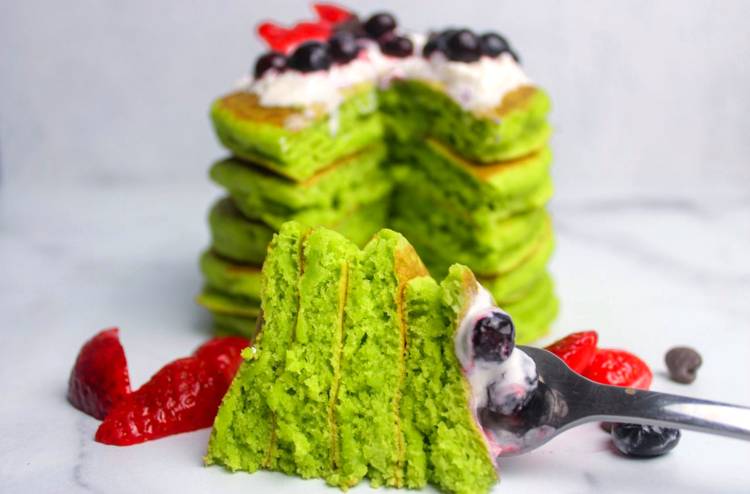 These vegan green pancakes are out of this world! Trick your kids into eating more veggies with this treat. This easy vegan pancake recipe is tastier, and healthier than normal pancakes. Think of the best pancake you’ve ever eaten. Slightly sweet with maple and super fluffy, right? Okay, well that’s exactly what we got going on right here, just green!

What makes these pancakes so healthy you may ask? Spinach. The spinach in these pancakes adds additional nutrients. Not to mention, creates a natural green colored pancake. You are going to love the flavor of these vegan green pancakes. Honestly, we intended on the spinach being used just for color. Their flavor is hidden by the other delicious ingredients. Nonetheless, you can still reap the benefits of these leafy greens.

This recipe is perfect for St. Patrick’s day, or if you’re looking to make some festive and fun food.  Plus, this is a better alternative to using artificial food dye.

Why is St. Patrick’s Day Green?

So what’s the deal with “green everything” on St Patrick’s day anyway? We were wondering the same thing. We did a bit of research and here is what we found out.

St. Patricks day is a cultural and religious holiday originating from Ireland held on March 17th. It celebrates St. Patrick. He played a large role in bringing Christianity to Ireland along with the celebration of Irish Pride. Interestingly enough St. Patricks day is celebrated in more countries than any other festival.

Historically the restrictions from lent were lifted during this holiday. Which is the reason some say this encouraged the consumption of alcohol on this day.

These colors can be found on the Irish flag today. The white in between the two colors represents peace between both religions.

According to legend, St. Patrick used the three leafed green shamrock to explain the holy trinity to the Irish pagans.

To further emphasize the color green, leprechauns were said to pinch anyone who didn’t wear their favorite color, green. Apparently from these reasons (and probably many more) we now have a holiday of green beer, green bagels and now vegan green pancakes!

Eat Colorful Foods and Be Happy

We always try to eat different colored whole foods. If the plate of food looks like a rainbow, it’s bound to make you feel good too!  In reference to fruit and veggies this quote says it all perfectly.

Psychologically, colorful food makes you happy. The visual cue of color when it comes to our perception can affect how we think something will taste. Colorful food can influence our brain to create an expectation that specific colors will taste a certain way. For example, the more vibrantly colored a food is, the more intense we expect its flavor to be. It’s safe to say humans eat with their eyes.

“Color plays an extremely important role in the everyday lives of humans. It can affect people’s thinking, actions, and reactions. Color sends subliminal messages to the brain, which is why companies spend a lot of time on choosing the right colors when designing their products. Food is one of the most important necessities in life that are influenced by color. The human appetite, choice of food, and interior designs of restaurants are some examples that are affected by color.”

The Relationship Between Food and Color, by Kalim Hussaini

Food production companies and marketing agencies are well aware of the influence, and how the presentation of vibrant colors affects human dietary/ consumption choices.

Americans are now eating five times as much food dye compared to 1955.  Since the emergence of food dyes and their popularity, studies have shown their impact on health and food choices. For example, many people are easily attracted to colorful foods.

Though food companies may be able to manipulate consumers’ choices via color. There have been some unfortunate side effects from serving artificial colorings in food. We hope to manipulate you into healthier eating with these vegan green pancakes!

In  2007, a British study found the risks of food dyes for children included displaying hyperactive behavior, along with aggression and irritability, within an hour of consumption. In 2010, the british parliament actually mandated that such foods contained labels and warnings.

I wish we had warnings like this in the United States! People might think twice before reaching for those treats! In addition, some food dyes like yellow-5, yellow-6, and red-40 contain compounds, including benzidine and 4-aminobiphenyl, which research has linked with cancer.

So let’s stick with the natural stuff, huh folks?

If you guys have been following our blog, you’ll know just how excited Luna is when she’s able to sneak “healthy ingredients” into an already healthy meal. Since she’s so excited about the (low key) “spinach” pancakes, I’ll let her tell you all about the benefits of these dark leafy greens.

Hey guys! Luna here 🙂 I just want to say I am so passionate about healthy eating but by no means am I a nutritionist or doctor. Based on my research, here is a spinach overview! Some of the main benefits of spinach include:

Spinach is rich in many nutrients, including Vitamin A, Vitamin C, Vitamin K, iron, folate, and potassium.  While we are not claiming these to be miracle pancakes. By adding healthy leafy greens to your diet is always a positive step toward healthier living.

We love to finish these pancakes off with a dolap of rice whipped cream and some fresh fruit. Though there is nothing more sweet than vegan chocolate chips added into the pancake mix. If you do add some dairy free chocolate chips, you’ll be sure to have a tasty vegan breakfast. The topping options are endless!

Of course you can use all the classic toppings on these colorful vegan pancakes.

Complement the taste of these yummy green pancakes with some homemade cashew milk or even a spicy iced mocha.

Definitely let us know what toppings you used! If you tried one of our recipes or found our articles helpful, let us know in the comments below how it turned out!

These vegan green pancakes are out of this world! Trick your kids into eating more veggies with this treat. This recipe is tastier and healthier than normal pancakes. Honestly, the spinach flavor is hidden by the other delicious ingredients. Nonetheless, you still reap the benefits of these leafy greens. Think of the best pancake you’ve ever eaten. Slightly sweet with maple and super fluffy, right? Okay, well that’s exactly what we got going on right here, just green!

When we refer to flax at Cooking Up Vegan we are referring to the seeds. The seeds can be bought whole, ground, finely ground, or even toasted.

Flax seeds come in two types of varieties, which include brown and golden (yellow). Both types of flax produce amazing beneficial oils, and are rich in essential fatty acids like omega-3. Flax is used a...