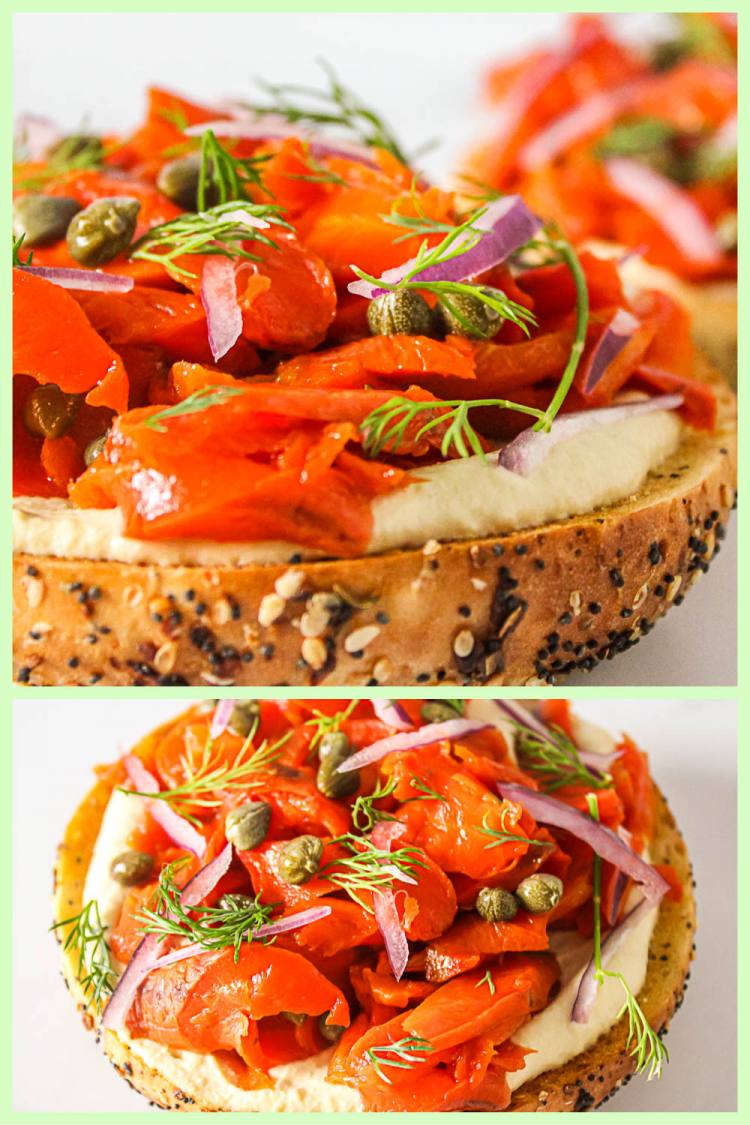 This vegan version of lox is perfect for anyone missing the taste and texture of salmon. It is also a great substitute for anyone with a fish allergy. Serve vegan lox for brunch or a nice breakfast. That’s not to say you can’t make this delicious vegan salmon any time of the day, though.

We personally really missed that salty fatty feel of biting into a toasted bagel with cream cheese, brined salmon, red onion, capers, and dill. There is something about the balance of flavors, textures, and smells that make a lox bagel so special. With a yearning to recreate this magical experience, we went on a quest to make a vegan lox recipe as close to the real deal.

Lox is a term used to describe a thinly sliced fillet of brined salmon. To brine means to preserve the food with salt water. Similar to the technique of curing meats but brining takes less time. Since the salt is used as a preservative, the salmon lox has no need to be cooked. This is what separates smoked salmon from lox.

The smoking process makes salmon’s soft texture more firm. Since lox is not smoked, the brining method is what allows these thin fillets to retain their delicate, buttery, smooth taste and texture. Traditionally, lox was derived specifically from the belly of the salmon. Today, any part of the fish can be used.

The term lox originates from the yiddish word for salmon laks. It was popular for many traditions, especially for Scandinavians and Eastern European Jews to brine their salmon. These traditions came to the United States in the early 1800s by migrants from Europe.

It was not until the mid 1800s, with the birth of the transcontinental railroad, that lox became popular in America. Barrels of salted salmon began to make their way around the country. In New York City, Scandinavian but particularly Eastern European Jewish immigrants gave rise to the popularity of lox.

It was a classic example of the New York City melting pot of cultures for the origin of the classic lox bagels. Bagels originated from Poland. Capers came from Italy. Cream cheese has its origin in the United States. It was New York City that added all the ingredients together.

How to Make Vegan Lox

So how did we turn carrots into a delicious vegan fish? Let’s take a look at the full carrot lox recipe rundown:

The carrots are the star in this show. We recently made vegan hot dogs out of carrots, and let just say, they did not disappoint! Carrots might just be the next best thing since sliced bread. Well, not quite, but they are very versatile. In regards to this recipe, carrots have a natural bright orange color similar to the color of salmon.

The carrots also make this recipe slightly sweet as well. Which works perfectly since salmon has a natural slight sweetness as well. Also, once the carrots have been cooked, they easily flake apart. Giving the same similar feel and texture as salmon.

Nori is dried seaweed. It’s healthy too. I’m sure you’ve seen it before. It’s used for making sushi rolls. Nori is a staple in most Asian diets, especially in Japan. It is often used to flavor soups and broth for noodles.

Nori is used to wrap around the carrots as they bake. By wrapping the nori around the carrots before baking, the carrots become infused with a salty sea flavor. This is one of our secrets to getting vegetables to mimic flavors of the sea, by using sea vegetables. This is a technique that Nate has used for many years. Particularly when he worked as a vegan sushi chef at South Beach.

There’s two sides to nori sheets. One side is matte or dull, and the other is shiny. When making sushi, chefs place the matte side next to the rice. The matte side is sticks better. We found it’s best to use the shiny side of the nori to roll the carrots. Otherwise the nori tends to stick to the carrots when you’re removing it after baking.

If you have followed our blog and used our recipes, you know we love using liquid aminos to season dishes. It is lighter than soy sauce, but packs all the flavor of soy and more. Liquid aminos adds a perfect amount of umami to these vegan lox. It is also a great alternative for soy sauce. Soy sauce is fermented, while liquid aminos are not. Soy sauce also usually contains a higher sodium content, due to added salt.

If you have ever had salmon before, you’d know it is a naturally fatty fish. Fat plays a huge role in flavor and texture. We wanted to mimic this fattiness in order to get the real salmon like feel. We know this because we tested the carrot lox without any oil, and it felt dry. Without that mouthfeel we were not satisfied with the results. While the oil free carrots were tasty, they were not a good salmon substitute.

If you are pursuing an oil free diet or trying to lower your oil intake, the oil can be excluded. Some other alternatives if you don’t like olive oil, or are searching for something more nutritious, are flax and hemp oil. Flax and hemp oil will add omega-3s to this recipe. These are typical fatty acids that you would get from eating salmon. Keep in mind that some oil oils have a stronger taste than others. Depending on the oil you use this could affect the flavor.

As mentioned previously, traditional lox is not smoked. Because of this, liquid smoke is optional to this recipe. Since this is a vegan recipe, the liquid smoke actually helps disguise the carroty flavor and make it seem more like salmon. Smoking foods in our opinion, is one of the best ways to add flavor. Especially when making vegan versions of meat or fish recipes.

With liquid smoke, life is simple. Just pop the cap off, and season your food. Be sure to proceed with caution when measuring and working with liquid smoke. Although we just mentioned how great it is, keep in mind that it is highly concentrated stuff! If spilled on your clothes, you will smell smokey.

The Himalayan salt in this recipe is optional, but we highly recommend it. The salt is placed on the bottom of the sheet tray under the carrots before they bake. This acts like the salt cure for a salmon. This also allows the flavors from the nori to leech into the carrots easier. Be sure to clean the carrots of salt before marinating.

Beyond Cream Cheese and a Bagel

Once you have finished the vegan lox, the fun begins. There are three different ways we can think of using this recipe. If you have more, let us know in the comments below!

We personally took an everything bagel, sliced and toasted. Then spread a vegan cream cheese on the base. We followed by adding beautiful thin carrot fillets. Then topped off this classic dish with with capers, sliced red onion, and dill. This is sure to impress your family and friends. Especially when paired with vegan deviled eggs.

This abbreviation (tt) is used for an ingredient amount and means “to taste”. Tt is commonly used in spices, especially with salt and pepper. Each individual likes different amounts of salt and pepper. Tt allows for you as a home chef to season to your liking.

To taste is also a good way to allow for various types of salt to be used. If you were to use the same amount of himalayan salt as you would kosher salt, the end result would be much saltier with the recipe using himalayan salt.