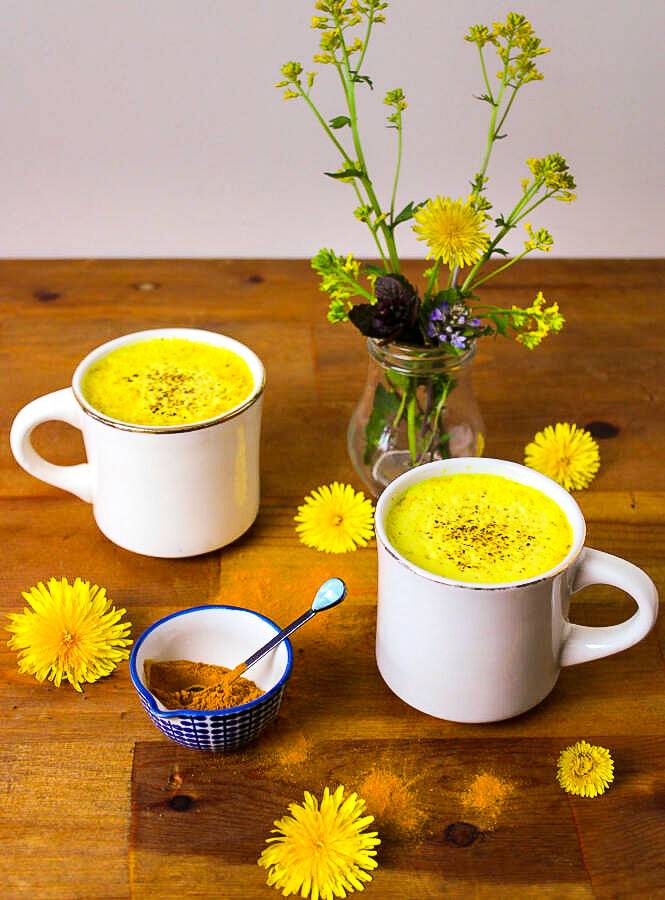 Looking for an immunity boost? This drink has been our go-to, and has also been sworn by for thousands of years! Golden milk is a warm creamy (dairy free) drink filled with turmeric and other spices. Originating from India this drink is traditionally served warm. This is Luna’s favorite drink, and she loves to enjoy it in the morning instead of coffee.

Turmeric has been used in India for thousands of years as a medicinal herb and spice. Curcumin is the main active ingredient in turmeric, which has powerful anti-inflammatory effects, and is a very strong antioxidant.

As for cinnamon and ginger, we could write essays about the benefits of these. Similar to turmeric, cinnamon and ginger contain powerful antioxidant and anti-inflammatory properties as well. This drink is also great for an upset stomach, as ginger is known to curb symptoms naturally. When you bring all three of these to the party, you have a powerhouse drink that gives you an immunity a boost!

Try our turmeric latte recipe over ice. Simply make the recipe as instructed and pour over ice! If you do not want to water the flavor down as much, and keep a more bold drink, use less plant milk.

While we used vanilla flavored plant milk, regular plant milk would work as well. In regards to the spices, feel free to experiment by adding or reducing the amount of spices in this drink. Lettuce know in the comments your spice mix.

If you haven’t yet indulged in a vegan Golden Milk Turmeric Latte, you’re missing out! Experiencing the creaminess from the coconut oil and the plant milk paired with warming spices feels like receiving a hug, but on the inside. If we could sum up the flavor and sensation in one word it would simply be, divine.

This abbreviation (tt) is used for an ingredient amount and means “to taste”. Tt is commonly used in spices, especially with salt and pepper. Each individual likes different amounts of salt and pepper. Tt allows for you as a home chef to season to your liking.

To taste is also a good way to allow for various types of salt to be used. If you were to use the same amount of himalayan salt as you would kosher salt, the end result would be much saltier with the recipe using himalayan salt.