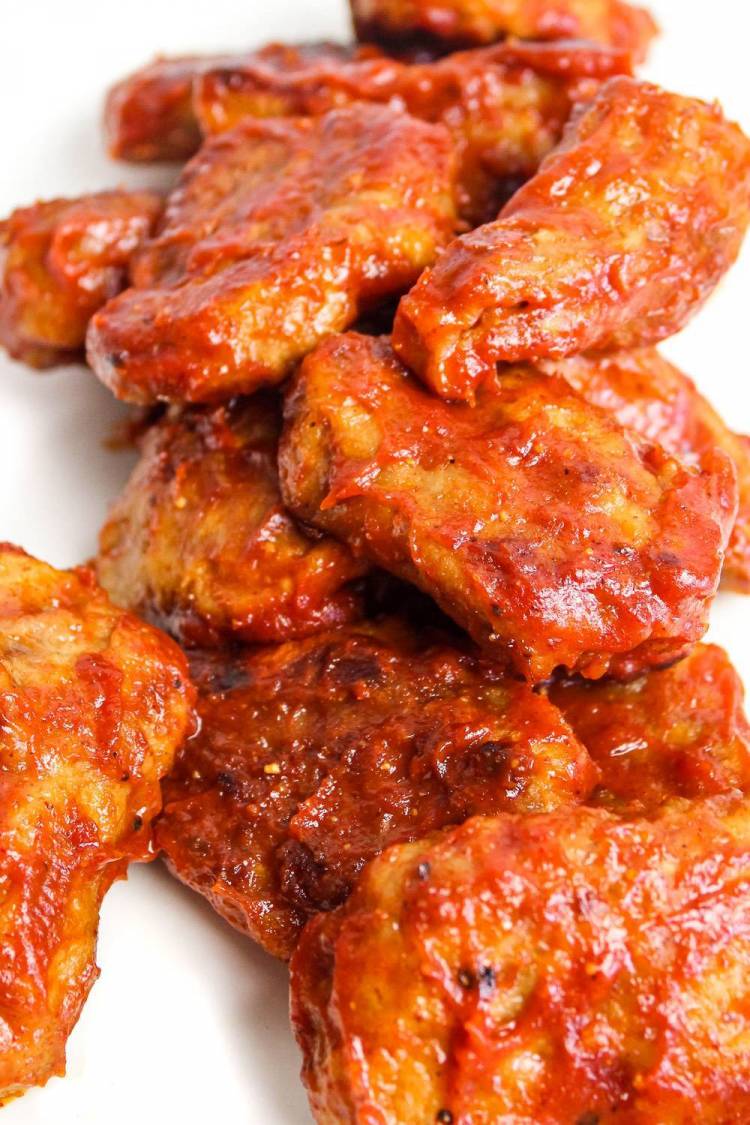 These vegan wings are boneless, meatless, and 100% vegan. One thing these vegan wings do not lack is flavor. A tangy, smoky, sweet, passion fruit, and mustard BBQ sauce coats these savory chewy nuggets.

These vegan wings will satisfy your cravings. They are great for people transitioning to a vegan diet, or simply want a meat substitute that is savory, filling, delicious, and flavorful.

This plant based recipe is also perfect for a party appetizer. People will be amazed at how much these look and feel like you’re eating a boneless nugget. These wings are not deep fried, or battered making them healthier than traditional BBQ wings.

With its low fat and zero cholesterol you can enjoy this appetizer guilt free. Did we also mention how easy this recipe is to make!? With a short list of ingredients, and just a few steps, we will show you just how to make vegan seitan wings from scratch.

If you have never tried seitan or have been a skeptic, here is the time for change! Seitan is a popular meat replacement for us vegans because of its texture, versatility, flavor, and look.

But what the heck is seitan?

Seitan (pronounced SAY-tan) is often used as a plant based substitute for meat. It’s sometimes called “wheat meat.” It’s similar to the flavor and texture of white chicken meat. Typically it is made from vital wheat gluten, the main protein in wheat. It feels like flour but is mostly gluten. Vital wheat gluten is produced by washing wheat flour until all the starch is removed, leaving just the gluten.

You can buy seitan pre-made, but we prefer to make it ourselves. It’s really easy and the results are much better. The trend lately has been to make seitan with flour dough, then stretching and pulling it under water. This washes away all of the starch granules in the flour. This method leaves a sticky mass that is then cooked. Not only is this method messy, but it takes a while to make and is tough to do.

That is why we chose to use vital wheat gluten that is already processed. Vital wheat gluten has already been stripped of any excess starch then dried into flour form. Some of you may have not caught on to the new trend yet, but we are sure that you will want to hop on as soon as you take one bite.

While developing this recipe we tried a common method for starting a bread dough. We mixed the vital wheat gluten, spices, and water into a food processor. This resulted in a clumpy dough. This happened even if we ran the food processor for just one second. Then we tried to gently rolling them into wing form but they came out looking like clumpy dough balls that cooked into really thick and chewy nuggets.

Basically, we realized that even slightly overworking the dough developed too much gluten. This made the final result too chewy. Lesson learned, be gentle when working the vital wheat gluten into a dough.

In our next test we added chickpea flour. Then mixed all the ingredients gentle using a spatula until a ball formed. Then used scissors to cut the dough to look more like wings rather than nuggets. Those were steamed, cooled, then seared and tossed in bbq sauce. They came out perfect!

No-Chicken Chicken Bouillon: This ingredient is essential. It is important to have the bullion in order to receive that depth of umami and meaty flavor in the seitan wings. We like to use bouillon paste and found Better Than Bouillon No Chicken Base is the best. In our opinion, it is the only bouillon that tastes like a chicken bouillon, and is vegan. You can also use their vegetable flavor if you can not find the no-chicken. This ingredient gives you a chicken flavor that can be used in soups, gravies, sauces, stews, sides, and even slow cooker meals. Look for it at your local grocery store. You can also find it online from multiple sources.

Vegan Worcestershire: If you didn’t already know, worcestershire sauce is not vegan. Typically this is used in meat dishes and it contains anchovies. We use Annie’s Organic Worcestershire Sauce, which is totally vegan. It is a flavorful condiment that adds umami, with slight undertones of clove and molasses. This is also great to use in soups, stews, and even vegan meatloaf. It not only boosts the flavor of the seitan wings, it also to create a rich depth of flavor in the BBQ sauce.

Nutritional Yeast: Would this truly be a vegan dish if we didn’t add a bit of nooch somewhere?! All jokes aside this ingredient is not just for vegan cheese, it is also for seitan. The nutritional yeast not only adds flavor to the dish, but it also helps the texture of the setian wings to be a bit softer.

Onion Powder: Onion powder is an essential ingredient to many savory dishes, including traditional chicken wings. Onion powder adds that subtle onion flavor, without as much pungency of fresh onion, while slightly sweet hints of garlic. Onion powder has a concentrated flavor and nutrient content.

Since living in Hawaii we have been exploring Hawaiian and Polynesian cuisine. Besides all the delicious fruits and produce, there has been one food product in particular that has exceeded expectations.

Typically we have used passion fruit for refreshing drinks or desserts. It can be used in sweet or savory dishes. Passion fruit is particularly popular and exotic for classical french pastries.

Aunty Lilikois sauce is essentially passion fruit juice infused with mustard, spices, sugar, and garlic oil. The perfect addition to our homemade vegan BBQ sauce. We highly suggest everyone to get their hands on some Aunty Lilikoi condiments. Their Passion Fruit Mustard can be substituted for regular dijon mustard.

Here’s a few ideas for serving these delicious vegan wings.

The best way to store these delicious boneless vegan wings is by storing them in the fridge. If the wings have been seared and sauce has been added they should last for about five days. If prepared and not cooked, six days.

An edible type of nut that derives from around 20 species of pine trees.
Full Description | Glossary