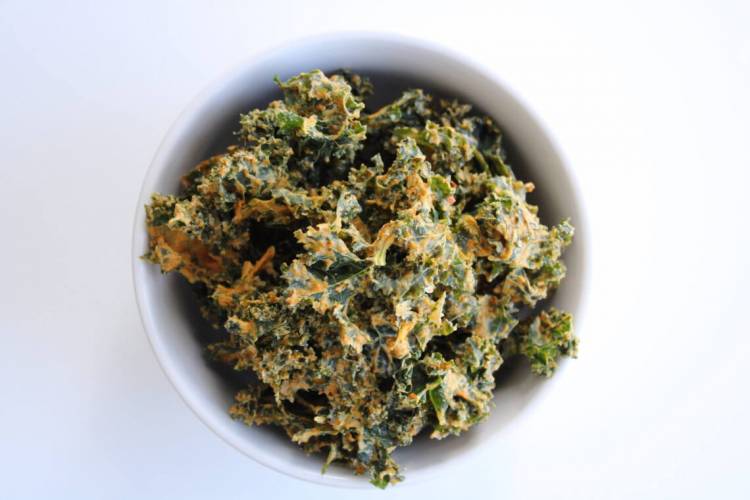 Our obsession with nacho kale chips started when we first lived in Los Angeles. We frequently visited Erewhon. If you’ve never been there before think of a toy store, but for health food junkies. At the time they sold a variety of flavored kale chips.

Of course, being the foodies we are, we bought just about every flavor. There was a pizza flavor, cool ranch flavor, bbq flavor and even a cheesy nacho kale chip flavor.

Obviously you can guess which was our favorite. The nacho kale chip flavor was our top favorite. Naturally, we created a recipe that is just as, if not cheesier than those kale chips we consumed in LA.

How to make the Vegan Nacho Cheese Sauce

The two secret components to this recipe are the creaminess of the sauce and the level of cheesiness.

Although the sauce will eventually dehydrate, it is important to have a creamy sauce. The creaminess will allow the dehydrator to remove the moisture and the flavors to develop more evenly. It’s also a better experience when the chip is coated in a uniform sauce, than having chunks of cashews or bell pepper everywhere.

To achieve the creamiest sauce consistency, it’s best to use cashews that have been pre-soaked. If you have followed our blog up until this point, you know the cashew drill!

Add the cashews, water, red bell pepper, garlic, salt and nutritional yeast to a high speed blender. Blend on high until a soft, smooth sauce appears in the blender.

How to dress the Kale chips

First, if your kale is fresh, be sure to wash the kale. Remove the stems and cut the leaves into chip sized pieces. This can be a rustic process, and they do not need to be uniform. In fact, it is nice to have a variety of sizes and textures!

Place the kale into a large mixing bowl. Begin to pour all the cheesy goodness into the bowl. Either using gloves or clean hands, massage the sauce onto the kale.

When the kale looks like an overdressed salad place onto the trays and into the dehydrator.

How long to dehydrate Kale chips

While dehydrating is a longer process than using an oven, the taste and texture is spectacular. We personally use an excalibur dehydrator and set the temperature to 135 degrees F for 8 hours.

The longer these babies dry, the crispier they are! We even tried leaving some of them in for 24 hours! After this amount of time, you can hear the crunch from a mile away! Although, usually, our kale chips are all gone within 24 hours.

How to Store Kale Chips

If by any chance the kale chips are not finished within the first day, you will want them to remain as fresh as possible. We found the best way to store these nacho kale chips is in an airtight container.

If you happen to have any silica gel packets (the little crystal packets you see in packaged food) this is a great thing to use them for. You could also store the kale chips in a ziplock back. The kale chips will remain at their most fresh point for about two to three days.

A slurry is a mixture of equal parts cornstarch to water. The water is whisked with the cornstarch to make a thickening agent. A slurry acts like roux and can be used in thickening soups, stews, sauces, and gravy.
Full Description | Glossary