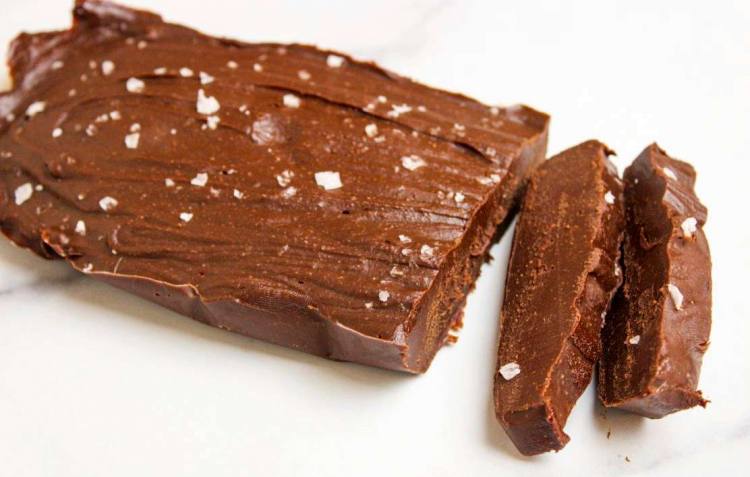 Looking for a homemade Mackinac Island fudge that is dairy free, cholesterol free, cruelty free? Then look no further!

This recipe is about as pure Michigan as it gets. Gooey fudge that melts in your mouth. Rich chocolate coats your palette, as you bite into this perfect plant based fudge!

With only 5 ingredients, you are going to love this vegan Mackinac Fudge. The texture is similar to real fudge, and the flavor is phenomenal. Don’t worry, you will not be using those long paddles or folding you fudge for hours over marble. This recipe is straight from the double boiler to cool.

You won’t be missing that milk and butter in this recipe, either. The nut butter provides you with a rich and healthier fattiness! This recipe is:

If you are a Michigander, have visited Mackinac Island, or simply love fudge, you have found the right page.

Nate’s love for fudge came from growing up in Michigan. Every summer his family goes to Mackinac Island. It is here where they bought many pieces of fudge. It was family tradition for everyone to pick out a flavor, and we would sample a smorgasbord of fudge!

If you’ve yet to visit we’ll give a little tour.

The only way to arrive to Mackinac Island is by ferry boat. As you ride across lake Huron, you can feel the cool breeze of the upper peninsula. It gets pretty cool on the fairy ride, and can even be cooler in the summer months, so be sure to pack a jacket! Also if you decide to sit on the top level of the ferry, you’ll most probably get wet from the splashes of great lake water.

The first building you can spot on the island is the historic Grand Hotel. It is giant and truly spectacular to see up close. As the boat turns the corner of the island, you begin to see the shops, boats, horses, and feel the buzz of the island. The captain will make this amazing maneuver and perfectly park the ferry at the dock of the island.

Once docked and out of the boat you’ll feel a sense of magic. You’ll only understand when you walk towards the main street that Mackinac island is really a Disney World for adults. The thrill rides of the island are the horses and bikes.

Of course it’s hard to explain unless you’ve been there but imagine a time machine just took you back in time to the late 1800’s. The small streets are filled with horses, tourists and the streets are lined with lots of colorful flowers. There are magnificent gardens and the landscaping is held to a very high standard.

Part of what makes the island feel so magical is the lack of cars on the island. Most vehicles are prohibited so the only way to travel is either via bike, foot, horse or horse drawn carriage. We personally prefer to ride the bikes, because it is a much better workout. Plus we like knowing that no animals were forced to do our bidding. It’s easy enough to bike ride around the whole island!

In addition to colorful flowers, souvenir shops, and candy stores line the streets. You’ll smell sweet fudge being cooked all up and down the main drag. Most candy stores have large glass windows, inviting you to come inside. In most candy stores, you’ll find groups of tourists watching artists cooling fudge on marble countertops. This is truly a spectacular sight to see, and an amazing culinary technique filled with much tradition and love.

Before we get into the recipe, here’s a little history of the famous Michigan Island.

Like many places in the region of the great lakes, Mackinac Island’s name originates from Ojibwe language. Mackinac Island is located in Lake Huron between the upper and lower peninsulas. Before European colonization in the 17th Century the island was inhabited by the indigenous Odawa as a settlement. Archaeologists have found pottery, fish hooks and other artifacts that prove a native american presence about 700 years before european exploration.

The island has been used as an important location for the fur trade in the great lakes. In addition, one of the former trading posts became Fort Mackinac, a british fort used during the American Revolution.

By the 19th century, the island became a popular tourist attraction. Many of the building structures have undergone historical restoration and preservation. Due to its historical significance the whole island is considered a National Historical Landmark. In addition, more than 80% of the island is preserved as a State Park.

Mackinac Island is famous for their fudge, and it’s a classic Michigan sweet treat!

A couple summers ago Nate took Luna to Mackinac Island for the first time. By this trip Nate was vegan, as was Luna. Traditionally fudge is made with sugar, dairy and flavorings like chocolate or peanut butter. So the hunt was on to find dairy free fudge. Low and behold out of what seemed like 50 shops only one had dairy free chocolate fudge. Shout out to Sanders for coming in for the dairy free win! If you are ever in northern Michigan, be sure to have a visit!

To begin with, Fudge is technically considered a sugar candy. Meaning that the sugar is crystallized by repeated boiling and via slow evaporation. Traditionally, this treat is made using sugar, butter, and milk. The ingredients are heated and then mixed. While the mixture cools it becomes creamy and smooth. The end texture is a mix between caramel and fondant.

Nuts, nut butters, fruit, caramels, chocolate, and sometimes other flavors are mixed in or added on top.

While fudge was not invented at Mackinac it certainly has become part of the culture. As can be seen by the annual Mackinac Fudge Festival. For over a century candy makers have used magic marble slabs to create a treat so sweet and delicious it embodies the essence of comfort.

Mackinac Island has an abundance of fudge shops, including:

The last time we were fortunate enough to visit Mackinac Island was last summer. Since the outbreak of COVID we have not ventured to visit the fairytale-like island.

So instead of going to Mackinac this year, we decided to put our culinary talents to the test. We developed our very own dairy free, vegan approved homemade Mackinac island Fudge.

Get creative with this vegan Mackinac Island fudge recipe. You can leave it plain chocolate, or add extras like: Nuts, Cherries, Seeds, or Fruit

This recipe is also flexible. We have used many different nut butters in this recipe including:

It is best when searching for your nut or seed butter, to make sure it is creamy and smooth. We found if the nut butter is a bit firm and hard it can make the fudge too thick.

Lettuce know in the comments below what type of ingredients you used in your fudge! Also comment your favorite fudge shop on the island.

Homemade dairy free gooey fudge that melts in your mouth. Rich chocolate coats your palette, as you bite into this perfect plant based fudge! Made with only 5 ingredients. The texture is similar to real fudge and the flavor is phenomenal. This recipe is straight from the double boiler to cool.