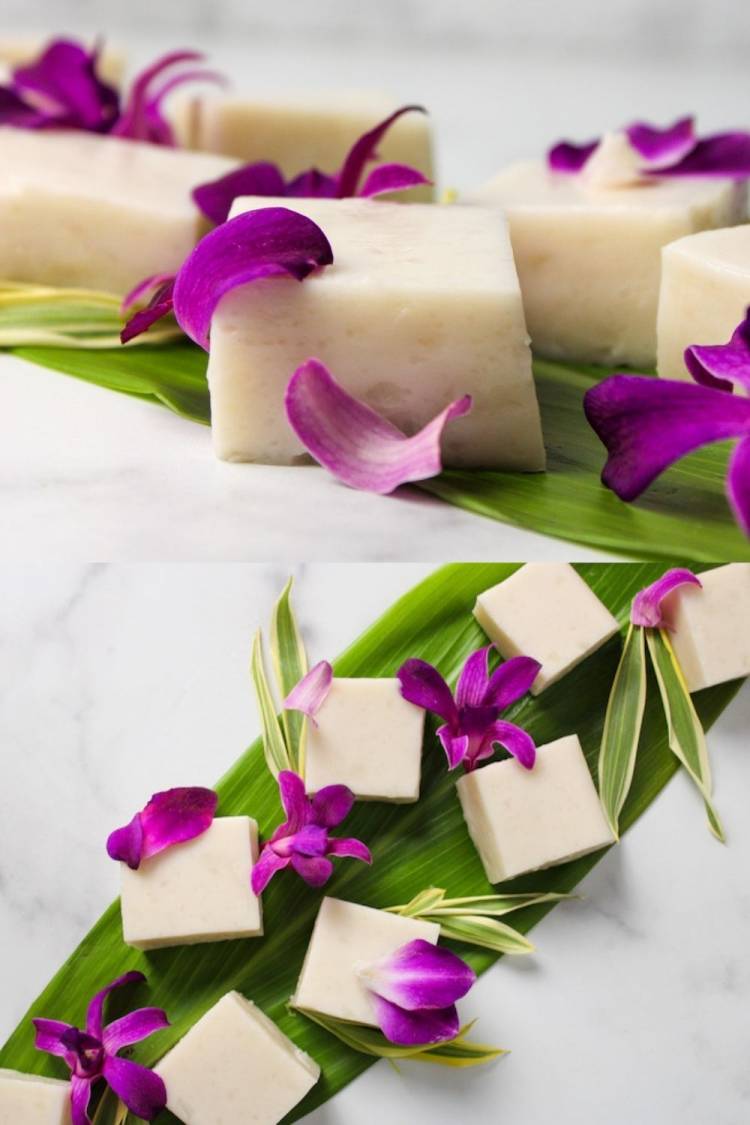 You are absolutely going to love this vegan haupia recipe. Haupia is a classic Hawaiian luau dish, which just so happens to be a plant based dessert. Using only 4 simple everyday ingredients, this will be your new go to easy vegan dessert. It takes less than 10 minutes to prepare this coconut treat. The hardest part of the recipe is waiting for it to set in the fridge. Then again, you could always scoop out a bit of this vegan haupia as a warm pudding dessert before you cool the rest! This vegan dessert is great for pleasing family and friends of all ages.

Haupia is creamy and sweet, and melts in your mouth. Haupia can be described as a cross between coconut jello and coconut pudding. If you’re unfamiliar with this dish, the correct pronunciation is “how-pi-ah.”

Typically, this dessert is made with four main ingredients, coconut milk, cornstarch, cane sugar and water. Coconuts are very common amongst the Hawaiian islands thus many dishes contain coconut. The fattiness of the coconut is what give Haupia its bounce and creaminess. The sugar, of course, makes it and life sweeter. The cornstarch is what holds all the ingredients together. While the water helps to balance all the ingredients.

You an find many Haupia variations all over the islands. For example, haupia mochi, haupia filled malasadas. Haupia can come in the form of a pie, or even a brownie layered on top with haupia. Even the local McDonald’s sells a deep friends haupia pie. Just imagine the McDonald’s Apple Pie but with coconut haupia filling.

Let’s take a look at the recipe rundown and exactly what makes vegan haupia so easy to make.

Coconut Milk– We love coconut milk. It adds a rich fatty component to vegan desserts. Most desserts that you find will be loaded with butter and heavy cream. While butter and heavy cream may be delicious, and even addicting, coconut milk is a great plant based alternative that gives a fattiness to dessert, while avoiding unnecessary cholesterol and animal fats. Not to mention, the coconut milk gives this dish a tropical vibe, and can easily transport your palate to a tropical memory. We highly recommend a natural organic full fat coconut milk. Do not use regular coconut milk. Be sure it is full fat and from a can. The boxed coconut milk will not produce the rich flavors of traditional haupia. Keep in mind that haupia originated in the 1940’s, and was made using fresh coconut milk. Fresh is best! And if you are feeling even more adventurous and have the time, you could even make your own coconut milk from scratch.

If you have an allergy to coconut try cashew milk as an alternative.

Cane Sugar– Sugar is what makes the vegan haupia sweet and Ono, which means delicious in Hawaiian. If you are trying to be mindful of sugar intake, or simply want to make the dessert a bit healthier, you may add less sugar, or even omit it entirely. We use organic cane sugar. It dissolves nicely into the coconut milk when heated, and we can be sure it is vegan. Some brands of white sugar can be bleached or processed using non vegan friendly methods. We stick to the more natural brandstorm make the beast vegan treats.

Corn Starch– Corn starch is the thickener in the haupia. It is what gives it the jello-like texture, and what binds the “pudding together.” Corn starch was brought to the Hawaiian islands, and haupia became a popular dessert in the 1940’s and has remained a staple at Hawaiian luaus to this day. Traditionally arrowroot powder was used instead of cornstarch. But due to avaliablity it is most commonly made with cornstarch today.

Vegan haupia is an easy dish to make, and will surely be a treat you can make easily again and again. With just a few simple everyday ingredients, and a moment of your time, you can be rewarded with an amazing dessert that transports your brain to a tropical island in the sun.

Creamy and coconut vegan haupia made from scratch