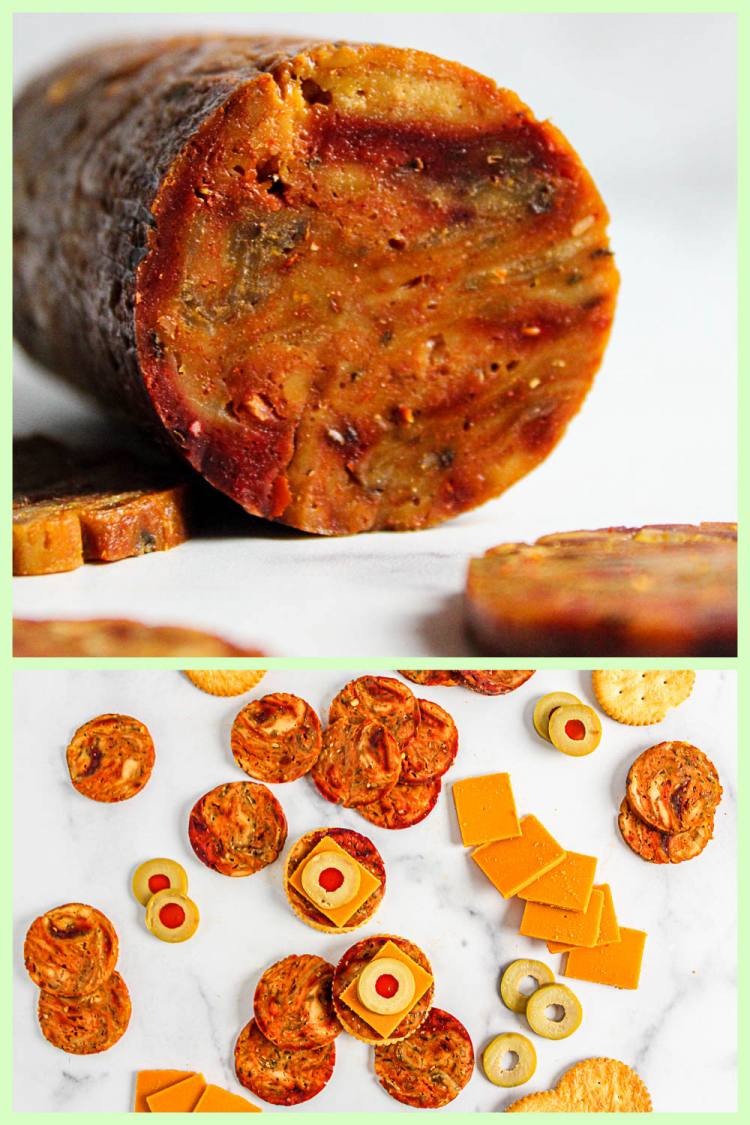 This vegan pepperoni is mind blowing! You will absolutely love the texture and flavor of this seitan pepperoni. Here you will find all of the secrets to making this spicy, smokey, delicious, protein packed vegan pepperoni.

The love for pepperoni is something that we missed as vegans. This recipe makes it possible to have that same experience, without unhealthy ingredients or killing any animals.

For any skeptics, say goodbye to thinking vegan pizza toppings are boring. This recipe is professionally crafted and approved. Perfect for pizza, with crackers, vegan cheese, or as a sausage alone. Try it in our Bean & Rice Soup with Vegan Sausage.

Your friends and family are sure to be surprised and enjoy this tasty treat.

Vegan pepperoni tastes, looks and feels like real meat pepperoni. Insanely enough, there aren’t any animal products involved in the process of making this recipe. We used vital wheat gluten, also known as seitan, for texture.

Vital wheat gluten is a type of flour that has a very high gluten content. Gluten is a type of protein derived from wheat. Basically, gluten is what is responsible for doughs and breads holding together. The manufacturing process of making vital wheat gluten includes, hydrating flour to activate gluten, then further processed to remove everything but the gluten. It is then dried and turned into a powder again.

Due to the amount of gluten in vital wheat gluten, when kneaded, the gluten becomes activated and the dough thickens. The texture becomes thick and chewy similar to steak, chicken, salami, and of course pepperoni!

Once the vegan culinary world realized the potential of this amazing flour, the possibility for freaky mock meat recipes not only became real but endless. For example, generally if you knead the vital wheat gluten longer the final texture will be similar to steak. If kneaded less, the texture resembles chicken. Texture is also based upon cooking method. For vital wheat gluten can be boiled and steamed, each producing a different effect on the final mock meat texture.

Pepperoni is a the Italian-American version of salami. Pepperoni is known for its soft texture and bright red color. Typically made from cured pork, beef, chili pepper and paprika. Interestingly, the spices used in American pepperoni are similar to the spices used to make a type of spicy sausage originating from Naples, Salsiccia Napoletana Piccante.

Though pepperoni is typically made from cured pork and beef (in the non-vegan world), turkey meat is also sometimes used as a substitute. In the United States pepperoni made with turkey meat is appropriately labeled.

In other countries like Canada, pepperoni can be served deep fried as pub food along with honey mustard for dipping.

If you have a favorite way to eat pepperoni, let us know in the comments below!

Difference Between Pepperoni and Sausage

Pepperoni can be considered a type of spiced sausage. But pepperoni uses a specific ratio of animal meat cuts to fat. Typically the ratio is 30% fat to 70% meat.

Sausage is made from ground meat but wrapped with animal intestine from hogs or lamb. The term for pig and sheep intestine is casing. Sausage is also fermented for preservation. Unlike pepperoni, lactobacillus bacteria is added to the sausage mixture. In effect lactic acid is produced. The lactic acids helps cure the meat as well as provide the tangy flavor in sausage.

Vital Wheat Gluten: This is a popular ingredient among vegans. It is commonly combined with water and different spices to make seitan to create a wheat based meat, sometimes called wheat meat or mock meat. Vital wheat gluten is made from the natural protein found in the endosperm of the wheat berry. This protein is what gives shape, volume, and elasticity to baked goods. When mixed with water, it becomes very sticky, elastic dough that when cooked or steamed has a chewy, meat like texture.

Tomato Paste: In regular pepperoni recipes it is not uncommon to add sugar. In this recipe, there is no added sugar. We opted to use tomato paste instead. Tomato paste is a wonderful ingredient because it contains notes of sweetness and also adds beautiful coloration to the vegan pepperoni.

Liquid Aminos: Liquid Aminos is essential for that meaty flavor. We love using this sauce in “meatier” dishes like our vegan hot dogs. It adds a savory umami taste that creates depth to the pepperoni.  We use the brand Braggs because they don’t use any artificial flavors or colors. The soybeans used in their products are also non-GMO sourced, which is important to us. Not only is it flavorful but it does actually contain essential amino acids necessary for bodily function.

Liquid Smoke: Another important ingredient to make that smoked meat like flavor. We chose to use hickory smoke in this recipe. There are many different kind of woods used to smoke pepperoni, but more commonly found is hickory and oak. Liquid smoke can be a very potent ingredient for a little bit goes a long way!

Paprika: Paprika is a spice loaded with health benefits, and also comes with great flavor. It is commonly used in traditional pepperoni. Have you ever noticed how the fat and oils from pepperoni stain almost orange or red? This is most likely from the paprika used in pepperoni recipes. It has a mild flavor, and is usually made from bell peppers. However, they do make certain paprikas that are made from hot peppers. There is also smoked paprika and it would be a good substitute if you couldn’t find liquid smoke. It will add that smokiness needed to make this recipe.

Fennel Seeds: Fennel has a warm sweet aromatic to it. It is sometimes called sweet cumin because of its similar flavor. It has a slight licorice flavor to it. Many traditional sausage recipes use fennel. It is a classic flavor most know and love it. Fennel seeds are also loaded with benefits, a main one being aiding digestion.

Oregano: Although not always used in pepperoni, we chose it for its earthy quality. It has a flavor that most associate with pizza.

Black Pepper: How could you have a pepperoni without the pepper? Black pepper is a classic spice that brings a woody, earthy, hot flavor to this vegan sausage.  Black pepper also contains a terpene beta-caryophyllene which helps calm people and reduce anxiety.

Star Anise: This one was a surprise to us. Nate made many sausages before going vegan. He made pepperoni just once in culinary school. So we did a bit of research.  A lot of homemade pepperoni recipes used star anise. Then we tested it. The result was great. Star anise adds a unique flavor but not too overpowering.

Grapeseed Oil: This is the fat in the sausage. By adding grapeseed oil, it adds moisture to the pepperoni, and gives a more real feel. You could also substitute any type of neutral oil to add fat to this recipe.

Garlic Clove: This was a cool trick we used to add flavor, texture, and visual experience.  It almost looks like the fat back that you would put in a normal pepperoni. The flavor of garlic pepperoni is hard to beat.

Beet Juice: This was our key to add more of that “meaty” color. It gives it a more red-pink hue to the finished product. By adding the beet juice after mixing the dough, it marbles into the seitan to create different color contrast in the vegan sausage.

There are 3 types of omega fatty acids. A-linolenic acid (ALA), docosahexaenoic acid (DHA) and eicosapentaenoic acid (EPA). Unlike some animals, mammals are unable to synthesize ALA. As a result, mammals only obtain omega-3 through diet.
Full Description | Glossary